Escape Hunt plc (LON:ESC), a global leader in the growing escape rooms sector, is holding its Annual General Meeting today which will be held as a closed meeting. Ahead of the meeting, Richard Rose, its Chairman provides the following statement on current trading:

“Trading in our UK owner-operated sites has been encouraging since we re-opened on 12 July 2020. We initially chose to open sites on Thursdays to Sundays only, with the exception of the Summer Bank Holiday on 31 August 2020 and have since extended our opening from Wednesday to Sunday. In the first eight weeks after re-opening to 6 September 2020, sales grew from an initial level of around 25% of the 7-day  week’s sales in the equivalent week in 2019 to over 90% of sales in the equivalent week in 2019  in each of the last two weeks of the eight-week period.  Since then September has, as expected, seen the pace of recovery slow, although sales in the six weeks to 20 September were nevertheless an encouraging 72% of the same period in 2019.

Additionally, helped by the UK Government’s flexible furlough scheme and our reduced operating hours, we have been able to operate sites significantly more efficiently with lower labour cost ratios than we have historically been able to achieve. As expected, the first four weeks following re-opening generated site level EBITDA losses as the level of sales was not sufficient to cover fixed costs, including property. However, in the six-week period to 20 September 2020, the growth in sales resulted in a positive site level EBITDA which was approximately 33% higher than the site level EBITDA in the equivalent six-week period in 2019.  Whilst the period under consideration is admittedly short, the performance is encouraging, in particular the significantly higher profit conversion ratios achieved.  We are, however, aware of the growing rate of COVID-19 infections and the likelihood of further restrictions being imposed, whether national or local, which may impact sentiment and performance.

With the exception of six of our thirty eight sites, our international franchise network has also re-opened.  While the rate of recovery varies in different parts of the world, overall we remain confident that key regions are recovering and will continue to perform in future. We remain positive, in particular, about the prospects for our US business through our area representative agreement with PCH.

In other areas, we are making progress on our strategy. As previously announced, on 23 September 2020, we opened our new site in Norwich to the public and our site in Basingstoke is well advanced and scheduled to open in October 2020. We have exchanged and completed contracts and are on site at a new site in Cheltenham and are in advanced legal discussions on a further two sites.

We have also been making progress on other initiatives. We were delighted to be able to launch a series of downloadable, print and play games during lockdown.  The most recent of these has been done in partnership with Netflix to coincide with the anticipated release of a Netflix Original Film and represents an important step in developing our ‘Escape Hunt for Brands’ proposition. In addition, we launched a remote play format which enables players collaborating remotely to direct a games master around a physical room whilst solving puzzles. We have been developing the range of remote and outdoor games which we offer using them to further develop both our ‘Escape Hunt for Brands’ and ‘Escape Hunt for Business’ propositions.

We will provide a further update in our interim results which are due to be released on 29 September 2020.” 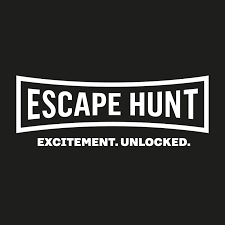 Escape Hunt’s Richard Harpman discusses their latest trading update, actions taken to mitigate site closures, progress in establishing digital and other play at home products, the acquisition of its French master franchise partner and what we can expect from the company over the next year in this exclusive interview with DirectorsTalk.

Escape Hunt plc (LON:ESC) CEO Richard Harpman joins DirectorsTalk Interviews to discuss its latest trading update. Richard talks us through the highlights, the actions it took to mitigate the impact of site closures, the progress in establishing digital and

Escape Hunt plc (LON:ESC), a global leader in the growing escape rooms sector, has confirmed that, further to its announcement on 26 February 2021, it has completed the acquisition of its French and Belgian master franchise partner, BGP Escape. Commenting,

Escape Hunt plc (LON:ESC) is the topic of conversation when Bob Liao joins DirectorsTalk. Bob talks us through the highlights from the company results, explains how the company is resourced over the shorter term and looking longer term the

Escape Hunt plc (LON:ESC), a global leader in the growing escape rooms sector, has announced that, further to its announcement made on 22 January 2021, it has exchanged contracts to acquire its French master franchise partner, BGP Escape.

Escape Hunt plc (LON:ESC), a global leader in the growing escape room sector, has announced the establishment and launch of a new HMRC tax-advantaged all employee share scheme, namely the Escape Hunt plc Share Incentive Plan. The SIP has

Escape Hunt plc (LON:ESC) digital and remote offerings have experienced stronger than expected demand, particularly from corporates restricted from physical events, including multi-nationals looking to bring teams together in different parts of the world. These new products are making a