KEFI Minerals plc (LON:KEFI), the gold exploration and development company with projects in the Federal Democratic Republic of Ethiopia and the Kingdom of Saudi Arabia, has provided an update on the Company’s activities in Saudi Arabia. KEFI’s operations in Saudi Arabia are conducted through its 34% owned joint venture company, Gold and Minerals Co. Limited, where KEFI is the operating partner.

·    Larger maiden resource of c. 20 million tonnes now expected in August 2020, an increase of 66% from the previous target of 12 million tonnes

·  This is based on completion of the first 9 months drilling and subsequent analyses and interpretation, covering a strike of over 4km to a depth of up to 350m

·    Hawiah remains open along strike and depth, where some higher grade intercepts have also been encountered, for further follow-up

Following the completion of the first 12,000m diamond drilling programme at Hawiah in May 2020, the work required to estimate the initial Hawiah Mineral Resource is now well underway with the maiden resource expected to be published in August 2020.

Diamond drilling undertaken by G&M since September 2019 has consistently intersected copper-zinc-gold-silver mineralisation contained within massive sulphide, across more than 4 kilometres of strike length. This drilling has allowed for the definition of three distinct zones, or lodes, within this strike length of the massive sulphide structure, which are the focus of the maiden resource.

KEFI previously advised in February 2020, that the combined volumes of these three lodes in the sub-vertical structure drilled to date was likely to exceed 12 million tonnes. The wireframes constructed for the Mineral Resource Estimate (“MRE”) now indicate that the combined tonnage of the massive sulphide lodes will likely be in the region of 20 million tonnes. The Hawiah deposit has only been tested to a vertical depth of 350m and remains open at depth and along strike. Increasing copper grades intersected in the deepest drill hole at the Camp Lode indicate an excellent opportunity to add additional high-grade copper-gold resources during the next phase of drilling.

Copper will contribute the majority of potential revenue at Hawiah, therefore it is useful to convert the copper-zinc-gold-silver grades into a copper-equivalent grade. At current metal prices and an estimated average grade of c. 2% insitu copper-equivalent, the Hawiah deposit is estimated to contain the equivalent in-situ value of approximately 400,000 tonnes of copper within the three delineated massive sulphide lodes.

Despite a number of challenges brought on by the COVID-19 pandemic, good progress has continued to be made on the block modelling and resource development, following what was a highly successful drilling campaign. The maiden Hawiah resource estimate is expected to be released in August 2020, following the lifting of certain COVID-19 related restrictions.

KEFI notes and welcomes the approval by the Saudi Arabian Cabinet in June 2020 of a new Mining Investment Law which is aimed at boosting the country’s mining industry and is part of Saudi Arabia’s plan to diversify its economy away from hydrocarbons. The Company also welcomes the expanded role of the Saudi Investment Development Fund specifically to support mining project finance.

This new regulatory impetus is expected to also help clarify the path forward to unlock value from KEFI’s Saudi gold discovery at Jibal Qutman, which has been on hold awaiting Mining Licence tenure confirmation. An Internal Preliminary Economic Assessment in 2015 suggesting estimated operating costs of c. US$600/oz and estimated capital expenditure of US$30 million demonstrate that Jibal Qutman’s Mineral Resources, totalling 733,000 ounces of near-surface gold, should be highly profitable in the current gold price environment.

Harry Anagnostaras-Adams, Executive Chairman of KEFI Minerals, commented: “KEFI and our G&M partner ARTAR look forward to participating in the development and expansion of the Saudi Arabian minerals sector, which the Saudi Government has made a national strategic priority. The recent approval by the Saudi Cabinet of the new mining investment law is a very positive development for our Hawiah (copper-gold) and Jibal Qutman (gold) projects in Saudi Arabia.

“The Hawiah deposit is shaping up to have similar mix of metals and to be a larger deposit than the nearby operating Al-Masane underground mine in southwest Saudi Arabia.

“We look forward to releasing the initial Hawiah Mineral Resource in August and thus providing further confirmation that our valuable Hawiah deposit has the scale and grades for a potential long-life, profitable mine. At current copper prices, it is notable that the in-situ value of Hawiah is already likely to be more than US$2.5 billion.”

The Company will issue its regular quarterly operational update, covering Q2 2020, before the end of July. The Company will also conduct its quarterly shareholder webinar on 30 July 2020, the details of which will be announced closer to the time. 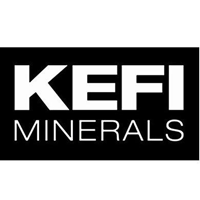 Gold prices rose to a five-month high on Monday, as the U.S. dollar weakened slightly after more Chinese cities relaxed COVID-19 restrictions over the weekend. Spot gold XAU= was up 0.5% at $1,807.21 per ounce, as of 0233 GMT, after

KEFI finalised the costings and finance plan by all the Tulu Kapi syndicate lead contractors, investors, and lenders for the updated US$320M Tulu Kapi Gold Project in Ethiopia. The agreement is currently being processed for final reviews and

KEFI Gold and Copper plc (LON:KEFI), the gold exploration and development company with projects in the Federal Democratic Republic of Ethiopia and the Kingdom of Saudi Arabia, has announced that a new investor presentation has been uploaded to

Aim-listed Kefi Gold and Copper has confirmed that an updated $320-million finance plan for the Tulu Kapi gold project, in Ethiopia, has been agreed by all of the project’s syndicate lead contractors, investors and lenders. The plan is

KEFI Gold and Copper plc (LON:KEFI), the gold exploration and development company with projects in the Federal Democratic Republic of Ethiopia and the Kingdom of Saudi Arabia, has announced that the updated US$320 million Tulu Kapi Gold Project costings and

KEFI Gold and Copper plc (LON:KEFI) is an exploration and development company focussed on gold and copper deposits, primarily in the highly prospective Arabian-Nubian Shield.

Base metals prices largely rose on Thursday, as a weaker dollar made greenback-priced metals cheaper to holders of other currencies, while nickel was boosted by hopes of strong demand from the battery sector. Three-month copper on the London Metal Exchange CMCU3

KEFI Gold and Copper (KEFI) has, this week, made two announcements pertinent to its future. In the first, it announced the renewal of its Jibal Qutman exploration licence in Saudi Arabia, which opens the way for the commencement

KEFI Gold and Copper plc (LON:KEFI), the gold exploration and development company with projects in the Federal Democratic Republic of Ethiopia and the Kingdom of Saudi Arabia, has provided its latest quarterly operational update. This update encompasses the

KEFI Gold and Copper plc (LON:KEFI), the gold and copper exploration and development company with projects in the Federal Democratic Republic of Ethiopia and the Kingdom of Saudi Arabia has announced the renewal of the Jibal Qutman Exploration Licence (K/144)

Domestic Gold prices gained on Monday as a softer dollar rekindled some of bullion’s appeal for overseas buyers. Meanwhile, the rupee depreciated by as much as 28 paise against the US dollar amid a surge in the global

KEFI Gold and Copper H1 2022 “one of considerable progress”

KEFI Gold and Copper plc (LON:KEFI), the gold exploration and development company with projects in the Democratic Republic of Ethiopia and the Kingdom of Saudi Arabia, has announced its unaudited interim results for the six months ended 30

KEFI Gold and Copper plc (LON:KEFI), the gold and copper exploration and development company with projects in the Federal Democratic Republic of Ethiopia and the Kingdom of Saudi Arabia, has announced that Tulu Kapi Gold Mines Share Company has successfully

Gold prices held firm on Tuesday near a two-week high hit in the previous session, helped by a subdued dollar, while investors awaited U.S. inflation data that could provide cues on the Federal Reserve’s interest rate hike path.

Copper prices rose on Tuesday on a weaker dollar and expectations for better metals demand after Chinese policymakers said they would accelerate infrastructure investment. Three-month copper on the London Metal Exchange CMCU3 rose 0.7% to $7,707 a tonne