Yew Grove REIT plc (LON:YEW), which owns a diversified portfolio of Irish commercial property assets, has announced a trading update covering recent asset management developments, rent collections for the third quarter of 2020 and portfolio valuation as at 30 June 2020. Yew Grove expects to announce its results for H1 2020 on 14 August 2020.

Yew Grove is pleased to announce it has agreed a number of leasing transactions, including the letting of Birch House, Millennium Park, with the net effect of increasing our contracted rent roll to €11.1 million (from €10.6 million). The WAULT to break currently stands at 4.6 years to first break (4.2 following our acquisition of Millennium Park in February) and 7.6 years to lease end (up from 7.5 in February). Vacancy across the portfolio has been reduced from 10.5% to 7.8% (by sq. ft.) and from 11.9% to 7.5% by estimated rental value (“ERV”) using the ERV set by our external valuers in December 2019. Details of the individual transactions are set out below.

The Company has agreed terms with a large multinational to lease Birch House, Millennium Park, in its entirety. Birch House is a modern three-storey office block, designed by Scott Tallon Walker, and comprises 40,333 sq. ft. of open plan space constructed around a three-storey atrium. The building is situated on the Millennium Business Park, in Naas, County Kildare, where the Company owns another five buildings, all fully let. The lease is for the building plus 156 car park spaces. The lease term is 15 years with a break option at 10 years at a headline rate of €16.50 per sq. ft. plus €200 per car park space per annum.

The Company has also agreed two further new leases. The first over its vacant retail space at Unit 24 in the Bridge Centre, in Tullamore. The unit is a prime, 750 sq. ft. unit at the front of the centre. The lease, to a major Irish financial institution, is for 10 years with a break at five years for an annual rent of €25,000 in line with our pre Covid-19 estimate of ERV. The second is in its Blackwater House property in Mallow, where we signed a ten year lease with breaks at one, three and five years with the North Cork Enterprise Board over an office of 1,457 sq. ft. at a rent of €14 per sq. ft, an increase of over 25% on the rent they were previously paying.

The Company has agreed the partial surrender and re-let of part (10,540 sq. ft.) of Unit A, IDA Business and Technology Park, in Garrycastle, Athlone. The building had been wholly let to Signature Orthopaedics Europe Ltd (a subsidiary of an Australian orthopaedic company) and the surrendered part has been let to KCI Manufacturing (a subsidiary of 3M). KCI already occupies Buildings B1 and B2 which sit adjacent to this building and the let satisfies KCI’s immediate expansion plans. The new lease is for five years, coterminous with the KCI’s other leases and the rent, of €9.29 per sq. ft., is at a 24% premium to the previous rent.

The Company agreed a re-gear of the OPW lease for 12,290 sq. ft. of office space at our property in Old Mill Lane in Listowel. The regear removed the July 2022 break option extending the lease to July 2027 in exchange for a c.€4 per sq. ft. reduction in rent.

The Company has agreed the surrender of the lease at 13 Holly Avenue, on the Stillorgan Industrial Park, Dublin. This industrial building of 16,990 sq. ft. is one of two connected buildings which were occupied by Diasorin; an Italian biotech multinational. Under the surrender agreement, Diasorin paid a sum equal to all rent due to the lease end (2 February, 2021) as well as €300,000 for dilapidations. The property is fully fitted as a high specification med tech industrial space and is currently being marketed (together with the adjoining property) for rent or sale.

A number of break options have not been exercised: at Millennium Park (Naas), the Bridge Centre, (Tullamore) and Blackwater House (Mallow) and extension options have been exercised at our Gateway (Dublin D3) and Waterford (IDA business and Technology Park) properties all improving the portfolio WAULT.

Yew Grove is also pleased to provide an update on rent collections for the third quarter. Of the annual rent, 95.5% of the Company’s rent is payable quarterly in advance, the majority  falling on the standard quarterly dates (being the first day of January, April, July and October), with some tenants paying on the first day of March, June, September and December and the remaining 4.5% is collected monthly.

All of the quarterly and monthly rent apart from the exceptions noted below has been collected. Approximately 1% of the rent roll (due from a large multi-national) has been delayed by a problem in their payment system but will be collected imminently. Approximately 1.3% of the third quarter rent roll has been deferred, and it is expected that the deferred amount (and those deferrals from the second quarter) will be recovered under a repayment plan from 1 October 2020. Approximately 0.7% of the third quarter rent roll is due from non-food retail tenants who only reopened their premises in June, and the Company is engaging with these tenants on an appropriate payment plan. As such, and subject to the collection of monthly rent due in August and September we expect that 98% of Q3 contracted rent will be paid in the current quarter.

At the 30 June our external valuers, Lisney, have confirmed that the portfolio has a current market value of just over €141 million. A reduction of €15,000 from the aggregate of the year end valuation at 31 December 2019 and the cost of the Millennium Park properties (€25.3 million), the purchase of which completed in February this year. Broadly speaking the valuation reflects the roll down in WAULT for those properties where the leases are now 6 months closer to break or lease end, an increased caution about the assumed void periods (i.e. the period for which buildings will remain empty when and if the current leases expire) and an increase in the yields that potential investors might require, especially on retail properties. Our asset management activity mentioned above has helped valuations by highlighting improvement in current rent levels, increasing WAULT and demonstrating the likely reduction in vacancy shortly after the valuation date. The valuation is caveated by the current RICS exceptional language seen in many property valuations in the past few months.

The net effect of this valuation is to reduce the value of our balance sheet by c €1.7 million (the sum of the acquisition costs of buying the Millennium Park properties, less the sum received on dilapidations in respect of Holly Avenue).

“Ireland is now reopening and we are all coming to terms with the ‘new normal’. Like everybody in the country, we hope that the economy recovers quickly and the damage caused to businesses and personal livelihoods by Covid-19 is both limited and temporary.”

“Despite the strains imposed on businesses by the crisis, the strength of our tenant covenant continues to be reflected in the robust performance of our rent roll and the stability of our portfolio valuation and I am pleased that the strong performance we saw in the second quarter has been repeated. The financial strength of our building occupiers is also good for the locations in which those companies are based. I am proud that our focus on tenants that are not only financially strong but also rooted in their communities with highly skilled employees and local specialist supply chains (principally domestic Irish businesses), means that they directly employ over 4,500 people across the country and indirectly support many more jobs.”

“Over the past three months the Company’s tenants, suppliers and our own asset management activity has been affected by the Covid-19 crisis. Many have been unable to occupy business premises, prospective tenants and their advisors unable to view properties and most businesses and people understandably dealing with the exigencies of the health crisis as a priority over business as usual. Despite this we are pleased that we have progressed with our plans to let vacant properties and actively improve our portfolio. Over the coming months I look forward to the Company making further progress in letting our remaining vacant space  and working with our tenants to improve the quality and environmental ratings of the portfolio.” 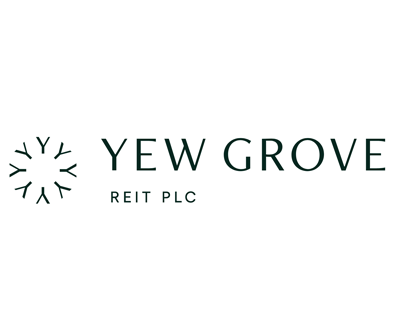 Yew Grove REIT plc (LON:YEW), which owns a diversified portfolio of Irish commercial property assets, has announced that the Board of Directors has approved the payment of an interim ordinary dividend in respect of the third quarter of

Yew Grove REIT plc (LON:YEW) invests in office and industrial assets in the Republic of Ireland (RoI). RoI was the best-performing European economy in 2020, with inward investment from multinationals, including medtech. Yew Grove taps into this strength,

Yew Grove REIT plc (LON:YEW), which owns a diversified portfolio of Irish commercial property assets, has announced that its results for the six months ended 30 June 2021 will be announced on Friday 27 August 2021. Analyst Briefing The Company’s management

Yew Grove REIT plc (LON:YEW), which owns a diversified portfolio of Irish Commercial property assets, has announced that the Board of Directors has approved the payment of an interim ordinary dividend in respect of the second quarter of 2021 (being the period from 1 April to 30 June) of 1.30 cents per ordinary share. This dividend will be paid on 27 July 2021 to shareholders on the register on 9

Yew Grove REIT plc (LON:YEW), which owns a diversified portfolio of Irish commercial property assets, has announced that the entire issued ordinary share capital of Yew Grove will today be admitted to the primary listing segment of the

Yew Grove REIT plc (LON:YEW), which owns a diversified portfolio of Irish commercial property assets, has announced that it has exchanged contracts for the purchase of an industrial building in Dundalk and two adjoining office properties in Citywest

Yew Grove REIT’s Jonathan Laredo discusses the highlights from their results, how they were able to grow the portfolio, reduce vacancy, and increase the rent roll, ESG, significant pipeline of potential acquisitions and what investors can expect for the reminder of the year in this exclusive interview with DirectorsTalk.

Yew Grove REIT plc (LON:YEW), which owns a diversified portfolio of Irish commercial property assets, has announced an increase in the Company’s portfolio valuation as of 1 March 2021. The Company is preparing a prospectus in connection with

Yew Grove REIT plc (LON:YEW), which owns a diversified portfolio of Irish commercial property assets, is pleased to that it has agreed a transaction to fund the construction of a new building adjacent to one of its existing properties

Yew Grove REIT plc (LON:YEW), which owns a diversified portfolio of Irish commercial property assets, has announced that its Full Year results for the period ended 31 December 2020 will be announced on Monday 22 March 2021. A briefing for analysts will take place at

Yew Grove REIT plc (LON:YEW), which owns a diversified portfolio of Irish commercial property assets, has announced an update covering recent asset management. The Company has agreed a new lease for the entirety of the Gateway Three building,